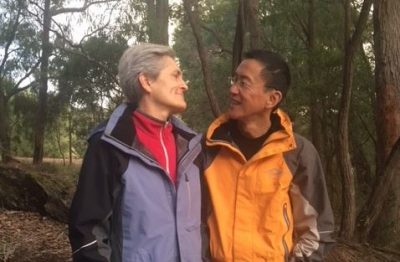 Raymond Yong’s vision started to become blurred while he was out at a restaurant celebrating his daughter’s 12th birthday in 2011. He felt like the room around him was spinning and he started to lose consciousness.

“The room was spinning, I could hear people talking to me, but I wasn’t connecting with them,” he remembers. His wife and daughters took him to hospital, where tests revealed that his liver markers were out of sync. He was told to see his GP.

For most of that year, 2011, Raymond underwent a variety of tests to determine the cause of his illness. As time wore on, he began to experience extreme fatigue, and his body became incredibly itchy. His GP consulted a gastroenterologist and upon learning that his stool was white and his urine brown, he was taken to hospital and placed on the emergency list.

Raymond underwent major surgery known as a Whipple’s resection. His biliary gallbladder, duodenum, part of his pancreas, and much of his stomach was removed. Although his cancer had been caught at an early stage, surgery was not enough to remove it – it returned and his chance of surviving for the next five years dropped to 3-4%.

“This is where the GI Cancer Institute comes in,” remembers Raymond. He was eligible for the TACTIC trial, which aimed to determine whether the antibody treatment panitumumab could be combined with standard cisplatin and gemcitabine chemotherapy. This was a new form of treatment for biliary tract cancer, which had promising results in terms of extending survival for patients.

Raymond’s participation in the TACTIC trial gave him extra time and he qualified for a new form of radiation therapy called cyber knife therapy. Through his access to new treatments, Raymond has been able to survive well past five years after his initial diagnosis. He says that there needs to be more research into treatments for gastro-intestinal cancers, and more awareness of the scale of impact that they have.

“I think with cancer sometimes, when you break it down into subsets like biliary tract cancer, the numbers get pretty small, and you go, ‘Oh, they’re minor cancers,’” says Raymond. “But if you look at the whole body of gastro-intestinal cancers, then the numbers are pretty big. I don’t think that story has been sufficiently well told.”

He says that further advances in treatment for these cancers are needed to give other patients the opportunities that he has had.

“My perspective is, I potentially don’t get to see my kids grow up, and I’ve had an additional nine years,” he says. “I can’t describe how grateful I am for having had another nine years.”

Give hope to other GI cancer patients – support new critical research in to improved treatments and please click here to donate (all donations are directed to research and no matter their size do make a difference – providing much needed hope for those diagnosed).