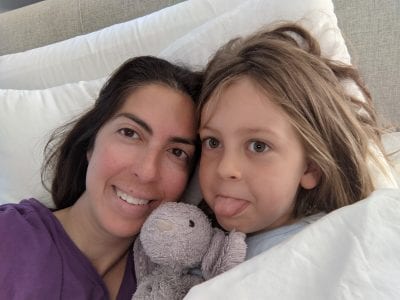 Like many new mums, Meg had started to notice changes in her body. She was tired, losing weight and her back was always painful. All of which were vague enough to be explained away easily as life as a new mum, but sadly they were signs of something much more serious.

In her own words, Meg shares her story from shock diagnosis with gastro-oesophageal cancer through to challenging treatment and surgery, to the wonderful family milestones she’s been able to witness thanks to an immunotherapy clinical trial keeping her tumours stable for the last three years.

In early 2017, as I enjoyed the last of my maternity leave and prepared to return to teaching, I was noticing some troubling signs. My body was trying to alert me to the progression of cancer that I couldn’t see. I was exhausted, losing weight and enduring pain across my mid back.

My doctor, family and friends suggested the weight loss could be stress related and that back pain was unfortunately normal after pregnancy and while carrying a baby up three flights of stairs. I understood well the toll that stress can have on the body. But 2016 had been one of the best years of my life. I was happy and relatively stress free. It didn’t make sense.

Regardless, I spent two months swimming laps and trying to improve my core strength. I saw a physio and a chiropractor who taped up my back, got rid of knots and tried to help improve my posture. It didn’t help. My symptoms were getting worse but still vague enough to be explained away by being a new mum, and the daily struggles of life in general.

My husband encouraged me to go back to the doctor and a general blood test showed that I had a few markers out of the normal ranges. My doctor sent me for a CT scan which came back a few days later showing “lesions” in my liver and lungs. When she called, she’d already made an appointment with a gastroenterologist for me a few hours later. She’d chosen that specialist because of a symptom that I’d told her about as an afterthought. I’d had a strange experience of feeling dizzy and like I was choking when food had become stuck down in my chest.

I had to ask outright if we were talking about cancer.

I was told straight away by the gastroenterologist that it was primarily older men that develop the type of cancer I was suspected of having.

Our next step was to find evidence of the original cancer site, which would prove what type of cancer I was being diagnosed with and give much needed direction. He gave me the choice of a lung puncture or endoscopy the following day. I could barely grasp the information being thrown at me let alone prepare mentally for a procedure called a “puncture”. I chose the endoscopy assuming there would be anaesthesia involved.

We hoped the results from my oesophagus and stomach would be negative and that I’d need to follow up with a lung puncture to prove that I had lung cancer. Within one day, I was being asked by the universe to shift my thinking so radically that I was hoping for lung cancer.

My gastroenterologist did the endoscopy himself and kept me waiting the rest of the day to come and tell me in person that he’d found the original cancer site, where my stomach meets my oesophagus. This was not the result we’d wanted or expected.

Even within the world of cancer, it was a disaster.

Gastric cancers like mine with symptoms that can be masked often go undetected for too long and often get diagnosed after they’ve spread. There is currently no screening process for gastric cancer in Australia, but I hope one day that will change. It is on the rise and affecting people a lot younger than previously thought.

After being diagnosed, the first line of defence was an aggressive cocktail of chemo drugs that made me incredibly sick and stopped working after a few months, as predicted by my doctors. The immunotherapy trial which was considered less effective became my next best option. It has since become the backbone of my treatment plan. It has kept tumours in my liver and lungs stable for the past 3 years.

The path I’ve been on has been intense and complicated.

In addition to immunotherapy, I have endured radiation and several surgeries to my stomach, oesophagus and brain. I am so grateful to the team of medical staff who have fought for me to be able to continue taking this drug even though I’ve needed other intervention as well.

The stability immunotherapy has given me has kept cancer in my liver and lungs stable while I’ve recovered from treatment to other areas of my body. It has given me a few months each year to recover and be almost symptom free. It has allowed me to be here with loved ones over the past few years, much longer than my initial prognosis. If I had known more about immunotherapy in 2017 and had access to drugs that I could afford, I might have chosen that treatment over chemotherapy. It might have saved me from a nightmarish 6 months of chemo and the surgery to my brain, where the cancer had already spread to before I began the immunotherapy trial.

My daughter Gracie had just turned 1 when I was diagnosed.

She was still holding my hand and learning to walk. Now, we’ve celebrated her 5th birthday and start of Kindergarten together thanks to an incredible team of oncologists, nurses, doctors and support from family and friends.

I’m here because of new and emerging drugs like the immunotherapy trial that I’ve been a part of for three years now.

Being diagnosed with cancer does not make me an expert. I will always be a primary school teacher, not a doctor. We need professors and specialists on the cutting edge of science, ready to tackle unexpected cases like mine that are sadly becoming more “normal”.

Without them, and without the research and science, I would not be here to write this today.

Clinical trials are crucial to give people with GI cancer, like Meg, more time with their families.

You can give hope to other GI cancer patients by supporting research in to new innovative treatments.

All donations are directed to research and make a difference, no matter their size – providing much needed hope for the 28,600 Australians diagnosed with a GI cancer every year.