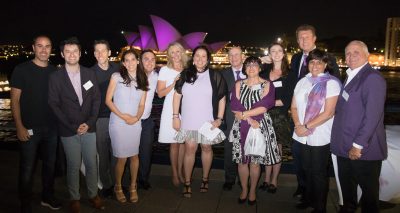 Purpling our World, One Hashtag at a Time

Tragedy struck Daniel Goulburn’s family in August 2014, when he lost his wife Rochelle to pancreatic cancer, 16 months after she was diagnosed.

Throughout Rochelle’s treatment, Daniel and their daughters Sara and Jessica found little support and awareness of pancreatic cancer.

In the hopes that people in the same situation don’t feel alone, two months after Rochelle’s passing the family founded the #PurpleOurWorld social media movement, with the goal of raising awareness about pancreatic cancer.

“When Rochelle was diagnosed, we didn’t know much about the pancreas or what it did in the body. It was only after her passing that we realised there was a distinct lack of awareness of pancreatic cancer, and it was a disease that’s forgotten and neglected,” Daniel said.

#PurpleOurWorld was founded three weeks before the first World Pancreatic Cancer Day, and the movement simply asked people to wear purple, and share an image on social media with the #PurpleOurWorld hashtag. The family were overwhelmed by the response, leveraging the success of the campaign to continue their mission and partner with other advocacy and research groups.

In 2015, the Australian Pancreatic Cancer Alliance was formed. #PurpleOurWorld and GI Cancer Institute are both members together with other pancreatic cancer advocacy and fund raising organisations. The group meet quarterly and are a collaborative voice, raising awareness of pancreatic cancer in Australia. In 2017, they even had the sails of the Sydney Opera House lit up in a vibrant purple on the eve of World Pancreatic Cancer Day (pictured).

These efforts have not gone to waste as pancreatic cancer awareness is improving, so much so that Cancer Australia on behalf of the Australian government are in the process of developing the National Pancreatic Cancer Roadmap, a process Daniel is participating in and fully supports.

“Hopefully this will lead to government having a roadmap to deal with the continuity of care for pancreatic cancer patients, from early detection to palliative care and understanding what needs to be done over the next five years.” Daniel commented

Although the 5-year survival rate has improved from around 8% to 11.5% in the six years since #PurpleOurWorld started, and community awareness is higher, Daniel says “there is still a long way to go before pancreatic cancer gets the attention it so desperately needs”.

“The ultimate aim for #PurpleOurWorld is to improve survival rates, but it’s going to take some time. It’s been neglected for a while, but I sincerely hope we’re getting over pancreatic cancer being a forgotten cancer. To work in this area is a privilege and I feel we’re doing something right and making sure other families don’t go through what we went through.”

Share
Impact of your Support
In Memory of an Incredible Woman