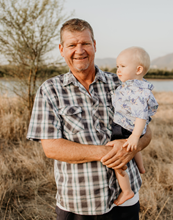 Jason Tysoe was a well-loved, family man. Nothing meant more to him than his loved ones.  As his eldest daughter Sarah describes him “Dad was our hero. Resilient, strong, hardworking, selfless, loving and funny”.

Jason started to feel unwell in October 2017. On a visit to the doctor some months later, the doctor recommended an endoscopy and colonoscopy be performed.

Jason was diagnosed with oesophageal cancer in March 2018, a few days before his 48th birthday. This was the start of a two-year journey which included different chemotherapy medications and major surgery for an oesophagectomy, which involves removal of part of the oesophagus.

“On the initial diagnosis we were worried, scared and stressed,” says Belinda Tysoe, Jason’s wife.

“It was the beginning of the unknown, a whole new world, something we had never thought of or been exposed to before. Cancer was a dirty word. But Jason was focused, strong and always guided by the treatments proposed by his specialists and doctors,” says Belinda.

After his initial diagnosis and surgery, life continued as normal, until November 2019. A CT scan revealed that the cancer had started to spread, and Jason and his family were given the heartbreaking news that nothing further could be done. Jason battled stage 3 oesophageal cancer for 18 months, before it had metastasised to stage 4 gastric cancer. He sadly passed away in October 2020.

“We have so much respect for Jason’s talented oncologist, Dr Matthew Burge. He goes above and beyond for his patients, and he tried everything for Jason. Jason was part of a clinic trial for the first stage of the cancer. We were so grateful for that,” says Belinda.

“There is not enough known about GI cancers, the more we can do to get the word out the better. I’m hoping our fundraising page makes a difference to further advance clinical trials, to help families like ours, and maybe save someone’s life.”

“There’s a lot I’m going to miss about Dad,” says Sarah, Jason’s daughter. “Seeing him sitting in his chair as I walk through the door, or by his fire outside watching the sunset. Hearing him working on his car in the shed, playing with Levi (his grandson) or listening to his voice as he tells one of his many stories.”

“He asked that we never forget him. He wanted us to remember him. To share his stories with his grandchildren so that they would know who he was.”

In Memory of Jason, the Tysoe family created an In Memory fundraising page for Jason’s birthday and asked friends and family to make a donation to GI cancer research. To find out how you can honour a loved one’s memory, visit our In Memory Page.