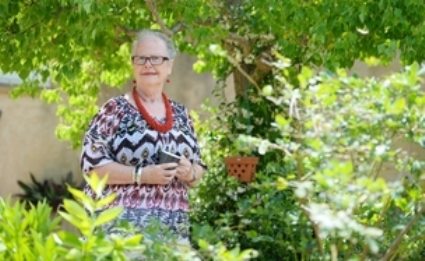 Jilli Blackler is a GI cancer survivor and an inspiration.

A speaker on Survivorship at our Engage Community Forum in Perth on November 18, she speaks from deep experience of a ten-year personal battle.

The former airline employee was first diagnosed with rectal cancer in 2000 at the age of 48 and underwent surgery. The cancer had spread, including to her lung and brain. Several operations followed — including two craniotomies and years of radiotherapy and chemotherapy.

During this time Jilli was helped by family, friends and colleagues — her workmates from Ansett brought meals and provided transport. Jilli says “Through all of it, I never felt like I was alone.”

She’s also grateful to “A great team of doctors — I take my hat off to them.”   Her oncologist was Dr David Ransom, also a speaker at the Engage forum.

Jilli’s last treatment was in 2005 – and she’s been clear of cancer ever since.

“People don’t talk about these cancers nearly enough”, she says. “We have to get it out in the open more.”

Her advice for people with GI cancer: “You have to keep your sense of humour – and you’ve gotta have hope!”